Remember the hockey puck of doom that powers the Tesla Gun? It’s a ZVS driver (also called a Royer oscillator) that drives a flyback transformer using an 18V drill battery. I used to make them as a dead bug circuit potted in silicone. Fast forward a couple of years, and now you can find them all over eBay for less than $20.

It occurred to me that it should be possible to charge the quarter shrinker using a battery and a couple of transformers in series. Let’s try it and find out!

After digging through my old box of transformers, I found a couple that didn’t arc too badly when powered up. I connected the outputs in series, using two independent ZVS circuits to drive them. The final output is approximately 20kV at 30mA with a charged battery.

I also added a little fan to help cool the IGBTs on the driver boards.

It began charging as expected, quickly climbing to a couple of kilovolts. At around 7kV, the rate slowed a bit. The fan gradually slowed down, and various components (the battery, main switch, and IGBTs) all started to heat up.

By 8kV (about two minutes charge time) it was clear that the battery was about to give up the ghost. I switched it off at 8280 volts and pulled the trigger.

The results were excellent! The coin in the middle was shrunk on battery power. The one on the right was from an earlier run with the usual NST supply, fired at 10kV. The standard quarter on the left is for scale.

I think it was a very successful experiment. If I swap the cheap IGBTs on the driver board for beefier switches, I think I can put together a reasonable power supply that lets us shrink on battery power all the way up to 10kV.

That will be handy next time there’s a tiny coin emergency during a power outage. 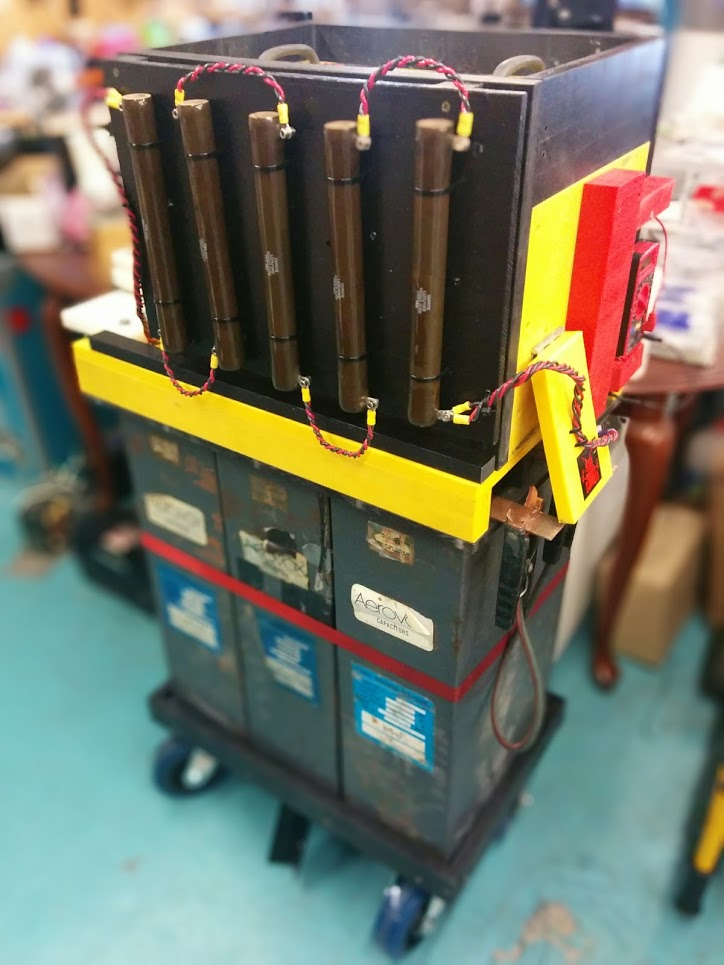