Back in 2009, I was one of several folks that built the coin shrinker at Hackerbot Labs.  After several hundred firings and sitting in a closet for months, it badly needed some love. We moved it to my shop and I got to work.

As with most projects on this site, the hazards here are many and subtle and include high voltage, extreme UV production, supersonic shrapnel, a several Tesla EMP, charging and discharging hazards, toxic smoke… In short, DON’T TRY THIS AT HOME. Come to my shop instead and we’ll shrink some coins. ^_^

Here’s a breakdown of how the Quarter Shrinker does its magic.

Energy is stored in three 10kV/100uF Aerovox capacitors wired in parallel with thick copper bus bar. The capacitor bank is quite heavy, weighing in at about 200 kg (450 pounds). When fully charged, the capacitor holds 15,000 joules. Is this dangerous? To quote Wikipedia,

Any capacitor containing over 10 joules of energy is generally considered hazardous, while 50 joules or higher is potentially lethal.

(Aside: we do in fact see dielectric absorption hysteresis after every firing. This toy can be lethal even after you think you’ve turned it off!)

The capacitor is connected to a high voltage DC power supply for charging. It includes a neon sign transformer, variac, and high voltage rectifier. The state of charge of the capacitor is monitored using a cheap semi-disposable volt meter and a 1000:1 voltage divider. Every volt on the meter represents 1000V on the bank.

The red and black twisted leads are connected to a hinged plate that is raised during use, but can be brought down at any time by pulling a long rope. Doing that immediately puts a large resistor across the capacitor, quickly and safely discharging it.

The main switch is a mechanical trigger with tungsten carbide contacts and an HDPE and delrin housing. It too can be gravity-closed by pulling a long rope. This is assisted by a rubber band made of surgical tubing, closing the switch as quickly as possible.

The trigger is shaped so that the contacts come very close together, but don’t actually touch. This keeps them from welding to each other or getting damaged from physical impact.

Current starts to flow well before the contacts come together, creating a fantastically bright flash of light (including ridiculous amounts of UV). Do not look at trigger with remaining eye.

The big plastic box on top is the blast chamber. It’s designed to absorb the force of the exploding coil without  breaking. A baffle system allows the rapidly expanding air and copper vapor to escape while trapping the copper shrapnel inside.

The copper coil consists of twelve windings of 12 gauge solid copper wire. Vice grips clamp the wire to the copper bus bar. As with nearly everything on this machine, the vice grips, sacrificial chunks of HDPE, and bus bar ends are all semi-disposable.

Physics Girl has a fantastic description of the physical forces at play, including how the quarter shrinks and why the coil explodes.

After pulling the trigger, the capacitor discharges in to the coil, shrinking the coin in less than 40 microseconds. The explosion is extremely loud. Ear protection, distance from the machine, and yelling “fire in the hole” are all mandatory.

The resulting shrunken coin glows white-hot during the process, and is quite hot for several minutes afterwards. Some of the copper coil is vaporized by the electric arc, creating a green copper plasma. The coin is typically covered in an atomically thin layer of copper, discoloring it. (Note to self: try to get an SEM photo of the copper plating on a coin when Millie is back online.)

My shop-mate Sirus made a nice 4k video of the setup process and first post-rebuild firing. (The charge time is probably greater than your attention span. To skip directly to the trigger pull, CLICK HERE.) 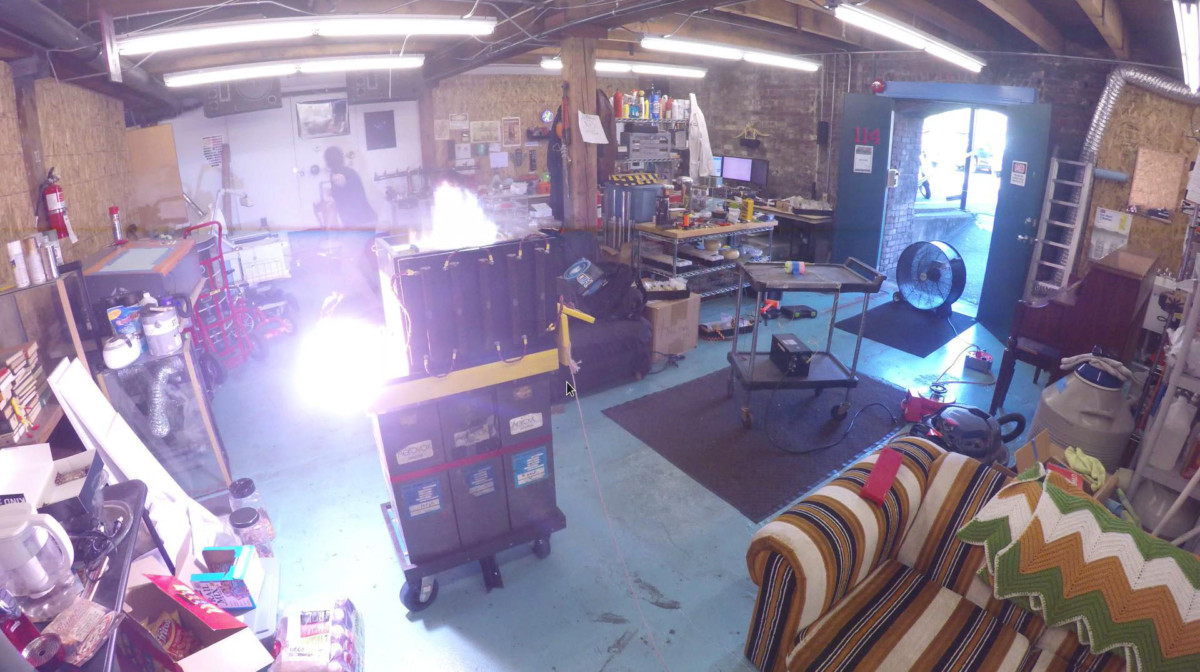 2 thoughts on “The Quarter Shrinker returns”